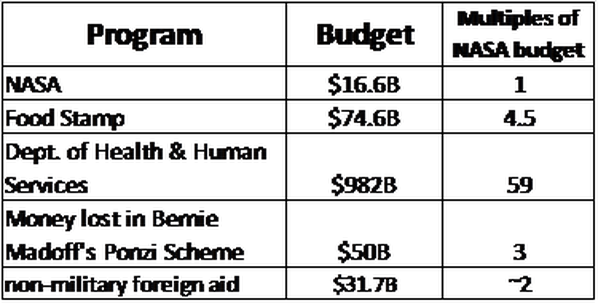 THEY SAY: “Why spend money on NASA or space exploration when there is so much need here?”
WE SAY: “4.5 times more is spent on Food Stamps & 59 times more is spent providing other goods & services to the needy compared to the entire NASA agency budget.”  Twice as much is spent on non-military foreign aid as NASA.
For those of you who still need an answer, we say go ask anybody from other countries around the world, “When was America greatest; when it landed on the moon in 1969 or when it spent $1 Trillion on its needy just in 2014?”  The entire Apollo moon program cost $109 Billion (in today’s money) spread out over 10 years.

While the American moon program is a source of great pride to those still in the space program, it is absolutely embarrassing that our astronauts must hitch rides into orbit from our former moon program rival.  It seems incredulous that a space program that was championed by two democratic presidents in the ‘60’s has fallen to its lowest point by a democratic president 40 years later. We are not advocating another government-ran moon program because Congress, NASA, and its contractors have gotten very smart at delaying the program with cost over-runs until $billions are wasted.  Instead, we wish to commercialize space by a method of establishing guarantee aerospace markets and utilizing competitive, firm, fixed contracts that we refer to as “Space Billets”.

Rather than cut or eliminate the space program, or punish NASA by cutting its funding, we need to change how NASA works.

WE SAY:  Congress and NASA should set bold goals with long-term, guaranteed markets and let aerospace companies determine how to accomplish those goals.

Congress and NASA should set bold goals, such as sending 200 astronauts to the moon over the next 10 years and sending hundreds of astronauts and space tourists to several space hotels for 500 to 2,500 man-weeks per year, and let private enterprise determine how to accomplish those goals.

WE SAY:  Congress and NASA shouldn’t be in the business of designing and developing rockets; they should only be involved with determining where we are going to explore, how many missions or people are going, and what are we going to do once we get there.

What are Space Billets and Why are They so Special?
We advocate the use of Space Billets instead of Cost-Plus Contracts.  Space Billets are firm, fixed contracts that NASA should utilize in conjunction with establishing guaranteed flight rates.


We think there is a major opportunity for America to retake the lead in space and turn space into a viable commercial enterprise via the use of Space Billets.  Within 10 years, we think it would be possible for people to travel to beyond the moon.  Within 25 years, we think commercial space tourism and lunar mining operations will nearly make NASA obsolete for near earth operations and at the same time take the politics out of the space program.  Here’s how it would work:

Other than the probes and astronauts, NASA doesn’t provide anything, the commercial companies perform all of the hardware development, vehicle processing, and launch operations.

We think that enough people will be interested in going to a space hotel that research conducted by NASA will play a minor role in the operation of the hotel; why send a NASA astronaut to conduct an experiment in space for you when you can go yourself.  We think the American public will demand a much greater increase in funding the space program after we have established a space hotel and space tourists have a chance of landing on the moon or even Mars.

Dr. Neil deGrasse Tyson, as you can see we have not stopped dreaming about the future; we have merely put our dreams on hold until we can be given the opportunity to live them.  In 2008, Candidate Obama stated that he would take money appropriated to NASA and give it to education[i]; unfortunately, too many people in the space community didn’t believe him.

DOWNLOAD THE BOOK FOR FREE ON THE HOME PAGE TO FIND OUT MORE!

Several members of ﻿theUSAParty.com﻿ have been involved in the US Space Program for many years.  We invite you to visit the website of our companion organization that is chartered by NASA:  The Space Propulsion Synergy Team